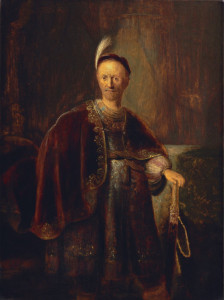 In earlier posts, we reported on the decisions of the lower courts, and finally of the Federal Administrative Court (Bundesverwaltungsgericht), on the legality of the continued publication of a search notice on lostart.de concerning Man in an Oriental Costume, a painting attributed to Jouderville, a pupil of Rembrandt, even after the painting had been located.  I had written that the judgment did not convince me legally, nor did I think it did the parties a service. The last post on the subject reported a case note of Boas Kümper who reached the same conclusion. In doing so, Kümper reviewed the decision in the light of the jurisdiction of the Federal Constitutional Court (Bundesverfassungsgericht) dealing with information provided and disseminated by state institutions (staatliches Informationshandeln).

The colourful background of the dispute between van Diemen & Co, the “Jewish” art trading company that auctioned the work off in 1935, and the “Jewish” bank, Jacquier & Securius, that had financed van Diemen’s partent company Margraf & Co is discussed in a 2011 BBC Feature.

Henning Kahmann, who acted for the subpoenaed participants (Beigeladene) which were ultimately was sucessful in these proceedings, had kindly offered to defend the Federal Administrative Court.* In addition, he provided me with an English translation of the judgment. END_OF_DOCUMENT_TOKEN_TO_BE_REPLACED

At a press conference today, the Gurlitt taskforce presented its final report on the provenance research into the Schwabing art find. Regular readers will be familiar with the Gurlitt case, which we have covered here in quite some detail. In a nutshell, the Gurlitt taskforce was established in November 2013 to deal with the art collection of Cornelius Gurlitt, the son of Hildebrand Gurlitt, a German art dealer who traded in degenerate art during the Nazi era. The collection was seized by the public prosecution (Staatsanwaltschaft) in Augsburg in early 2012 and was believed to contain a substantial number of looted artwork (see here for a detailed chronology of the Gurlitt saga in English). END_OF_DOCUMENT_TOKEN_TO_BE_REPLACED

In March 2015, I had reported a decision of the Federal Administrative Court (Bundesverwaltungsgericht) dealing with an application to delete the entry of a painting from the Lost Art database, once it had been located. Setting aside the decisions of the First Instance Court and the Administrative Court of Appeal (Oberverwaltungsgericht), the Federal Administrative Court had decided that locating the painting was not enough for the entry to be deleted from the Lost Art database. It widened the mandate of the database and held that the painting can remain registered on the database as long as there is no clarity as to ownership (“Die Suchmeldung ist nicht schon mit dem Auffinden des Gemäldes rechtswidrig geworden, weil noch keine Klarheit über das endgültige Schicksal des Bildes besteht.”). The judgment did not convince me legally, nor did I think it did the parties a service. END_OF_DOCUMENT_TOKEN_TO_BE_REPLACED

In May 2014, I had reported the decision of the Administrative Court of Appeal (Oberverwaltungsgericht) Magdeburg in a dispute about the deletion of a painting in the Lost Art database, once the painting had been found. The Administrative Court of Appeal at the time had held that, once a painting has been found, it must be deleted from the Lost Art database, as otherwise, the continued registration of the artwork would “taint” it and make it unmarketable. In a judgment issued on February 19, 2015, this decision has now been overruled by the Federal Administrative Court (Bundesverwaltungsgericht). END_OF_DOCUMENT_TOKEN_TO_BE_REPLACED