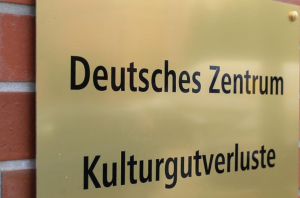 Last week, the German Lost Art Foundation (Deutsches Zentrum für Kulturgutverluste) announced that as of the beginning of this year, it has established a help desk to support victims of Nazi persecution and their descendants with enquiries regarding looted art. Here’s from the press release: END_OF_DOCUMENT_TOKEN_TO_BE_REPLACED

At a press conference today, the Gurlitt taskforce presented its final report on the provenance research into the Schwabing art find. Regular readers will be familiar with the Gurlitt case, which we have covered here in quite some detail. In a nutshell, the Gurlitt taskforce was established in November 2013 to deal with the art collection of Cornelius Gurlitt, the son of Hildebrand Gurlitt, a German art dealer who traded in degenerate art during the Nazi era. The collection was seized by the public prosecution (Staatsanwaltschaft) in Augsburg in early 2012 and was believed to contain a substantial number of looted artwork (see here for a detailed chronology of the Gurlitt saga in English). END_OF_DOCUMENT_TOKEN_TO_BE_REPLACED

In May 2014, I had reported the decision of the Administrative Court of Appeal (Oberverwaltungsgericht) Magdeburg in a dispute about the deletion of a painting in the Lost Art database, once the painting had been found. The Administrative Court of Appeal at the time had held that, once a painting has been found, it must be deleted from the Lost Art database, as otherwise, the continued registration of the artwork would “taint” it and make it unmarketable. In a judgment issued on February 19, 2015, this decision has now been overruled by the Federal Administrative Court (Bundesverwaltungsgericht). END_OF_DOCUMENT_TOKEN_TO_BE_REPLACED