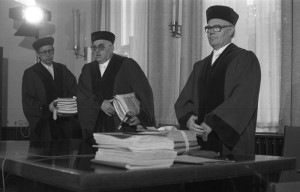 The Federal Ministry of Justice has put forward a proposal that would allow TV cameras into German courtrooms. But before you get all the excited about the prospect of bringing Court TV to Germany, look at the small print: the proposal would allow cameras only into the highest courts of the five branches of the judiciary in Germany*. And the TV cameras would be allowed to roll only when the presiding judge delivers a judgment, but not during a hearing. So what you would see on TV would just be five judges on the bench, with one of them reading a – no doubt well-reasoned – judgment. That’s as exiting as will it get, if the proposal is implemented.

The proposal is based on a recommendation that the Conference of the State Ministers of Justice (Justizministerkonferenz) made last year, and is now progressing towards a draft bill. The very limited scope of this proposal notwithstanding, there appears to be resistance from the judiciary across all the five courts.

The presidents of all five courts are opposing the idea, Bettina Limperg, the (first female) President of the Federal Supreme Court (Bundesgerichtshof) said at an event in Berlin recently. Rightly or wrongly, the judges apparently see this modest proposal as the beginning of a slippery slope towards full TV access to court proceedings. In a letter to the ministry, they argued that the authority of the courts would be undermined if the video clip of a gaffe by a judge ended up in a comedy show or on YouTube.

Last week, Andreas Mosbacher, a judge at the Federal Supreme Court, published a commentary on Legal Tribune Online supporting the reforms, in which he comprehensively dismissed the arguments put forward by the presidents.

Given the usual judicial self-constraint, the commentary is rather outspoken: Mosbacher concedes that a judge who gets things wrong might be ridiculed on YouTube. The risk of making a fool of oneself, he argues, is no greater for a judge than for anyone else holding public office. Given that we are talking about elite judges at the pinnacle of their careers who will most likely have had prior experience in dealing with media attention, this is a risk they ought to be willing and able to take – a risk which is further mitigated by the fact that the judges have sufficient time to prepare their presentations.

Mosbacher further states that in his opinion, the real risk for the reputation of the judiciary is not YouTube or the Daily Show (heute Show) – the authority of the judiciary is more likely to suffer damage as a result of “immunisation of the judiciary against criticism, incomprehensible judgements, excessive duration of proceedings, inordinate influence of political parties on the appointment of judges, unworthy and paralyzing legal disputes amongst judges themselves over the promotion to higher offices and outsized egos in red robes” (“Abschottung der Justiz gegen Kritik, unverständliche Urteile, überlange Verfahrensdauer, übermäßiger Parteieneinfluss auf die Stellenbesetzung, unwürdige und alles lähmende Konkurrentenstreitverfahren sowie Profilneurotiker in roter Robe”).

For a non-German reader, the latter two points perhaps requires some explanation: Over the last couple years, it appears to have become fashionable amongst judges at the highest courts in the country to block the appointment or promotion of another judge by commencing administrative proceedings (Konkurrentenstreitverfahren) in which they typically argue that the person who was appointed or promoted to a higher judgeship was less qualified and that the job should have gone to the applicant instead. As these administrative court proceedings delay the appointment, some courts have suffered rather severely as judgeships could not be filled. And whilst ordinary judges wear black robes, the judges at the highest courts appear in red.

I fullheartedly agree with this analysis. The judiciary must open up, and become more transparent. The judges should have sufficient self-confidence and embrace the proposed reforms. To quote Mosbacher: A strong and confident judiciary has no reason to hide.

Technically, the ministry is proposing is to amend Sec. 169 Court Constitution Act (GVG, Gerichtsverfassungsgesetz) and to allow the recording and broadcasting of the public announcement of judgments at the five courts. Currently, any sound or video recording of court proceedings is prohibited. The only exception, introduced in 1998, applies to the announcement of judgments of the Federal Constitutional Court (Bundesverfassungsgericht). Here, TV cameras are permitted, unless the court expressly prohibits themto protect the parties (Sec. 17a Federal Constitutional Court Act (BVerfGG, Bundesverfassungsgerichtsgesetz)).

The experience with TV reporting from the Federal Constitutional Court also shows that the risks are greatly exaggerated. I am not aware of any matters where the risks that the presidents pointed out materialised. So watch this space, we will be tracking the further progress of that proposal here.