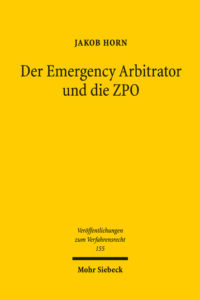 Legal issues with the emergency arbitrator

In broad terms, my thesis covers three main areas: First, classification of the emergency arbitrator in light of state-level law; secondly, enforceability of domestic and international emergency awards and the conditions for their enforcement; and thirdly, other related issues that arise such as the nature of the place of emergency arbitration, the requirements of fair proceedings, and the implications that emergency arbitration can have for the main proceedings.

Definition and Classification of the Emergency Arbitrator

Before any further analysis, it necessary to classify the emergency arbitrator: is she an arbitrator under the national arbitration law or does she fall into some other category?

The first step to answer the question is to define the emergency arbitrator. For this purpose, I developed a definition of the emergency arbitrator derived from the institutional rules of the largest arbitral institutions in the world, such as the ICC, the London Court of International Arbitration (LCIA), and the Hong Kong International Arbitration Centre (HKIAC).

Based on these rules, the emergency arbitrator can be described as a person who – on application by a party to an arbitration agreement – is appointed by a neutral third party to issue interim measures of protection that are so urgently required that it is not feasible to await the constitution of the arbitral tribunal (Horn, Der Emergency Arbitrator, p. 40). It is important to note that the parties must have agreed on this procedure, but this can also be done by simply choosing a set of arbitral rules containing a subset of emergency arbitration rules.

The finding is based on the understanding that an arbitral tribunal is a private body of one or more persons who, by way of private agreement, have been given the task of deciding a dispute instead of a state court. The emergency arbitrator meets all these requirements. She is tasked with deciding the dispute on issuing an interim measure of protection because the parties chose arbitral rules that allow the appointment of an emergency arbitrator.

Once it is established that the emergency arbitrator is an arbitrator, the question of enforceability can be addressed. The analysis must be two-fold: On the one hand, domestic emergency awards must be analyzed, and on the other, international emergency awards.

Enforcing domestic emergency awards is straight forward. Sec. 1041 ZPO (similar to Art. 17H of the UNCITRAL Model Law) allows the enforcement of interim measures of protection issued by an arbitral tribunal. Given that the emergency arbitrator is part of the main tribunal (see above), emergency awards are enforceable under this provision. Under German law though, it is more problematic to define the requirements for the enforcement of an emergency award. Contrary to Art. 17I of the UNCITRAL Model Law, Sec. 1041 ZPO does not explicitly state the grounds for refusing enforcement but leaves the decision entirely to the discretion of the court. Therefore, I concluded that the rules on enforcing final awards under Sec. 1059 ZPO – grounds for setting aside and refusing enforcement of final awards – can be used as a guideline, but must be adapted to the special requirements of enforcing interim awards (see in detail Horn, Der Emergency Arbitrator, Chapter 3, pp. 74 et seq.).

The next question is whether international emergency awards are enforceable. On the face of it, Sec. 1041 ZPO does not apply to orders of interim measures of protection from international tribunals. The lack of applicability also raises concerns for emergency awards. In addition to that, there is a lively discussion amongst commentators whether the New York Convention on the Recognition and Enforcement of Foreign Arbitral Awards of 1958 applies to awards or orders ordering interim measures of protection.

In my opinion, the New York Convention applies to those awards as well as to emergency awards. Primarily, the discussion centers on the question of whether an emergency award is final and binding. Finality is a particular concern because an emergency award can be terminated, changed, or otherwise revoked by either the emergency arbitrator herself or the main tribunal. Yet, there is no indication in the text of the New York Convention or its drafting history that only final awards shall be enforceable. On the contrary, the drafting history shows that the term “final” was removed deliberately from the text and the term “binding” was used instead. But, if an award must only be binding, an emergency award fulfills this requirement. The arbitral rules on which the parties have agreed require the parties to follow properly rendered emergency awards.

Since Germany is a contracting State to the New York Convention, I conclude that Germany is also bound to enforce foreign emergency awards. Based on the non-discrimination approach of Art. 3 of the New York Convention, I further conclude that Sec. 1041 ZPO must also apply to foreign emergency awards (for details see Horn, Der Emergency Arbitrator, Chapter 8, pp. 171 et seq).

Other questions relating to the emergency arbitrator

Dr. Jakob Horn, LL.M. is a trainee lawyer (‘Referendar’) at the Berlin Court of Appeals (Kammergericht), currently working at a law firm to fulfill the stage of trainee solicitor. Jakob studied law at the University of Jena, Germany, and at the University of Illinois, Urbana-Champaign. After graduating with the German first state exam in 2015, he worked on his PhD thesis with the title “Der Emergency Arbitrator und die ZPO” (The Emergency Arbitrator and the German Code of Civil Procedure) supervised by Professor Dr. Giesela Rühl, LL.M. For his thesis, Jakob was granted the title of ‘Doctor Juris’ by the University of Jena in 2018. In 2018/2019, Jakob completed the LL.M. program at Harvard Law School. Jakob’s PhD thesis on the emergency arbitrator is published by Mohr Siebeck: Jakob Horn, Der Emergency Arbitrator und die ZPO, Mohr Siebeck, 2019, ISBN 978-3-16-156939-5