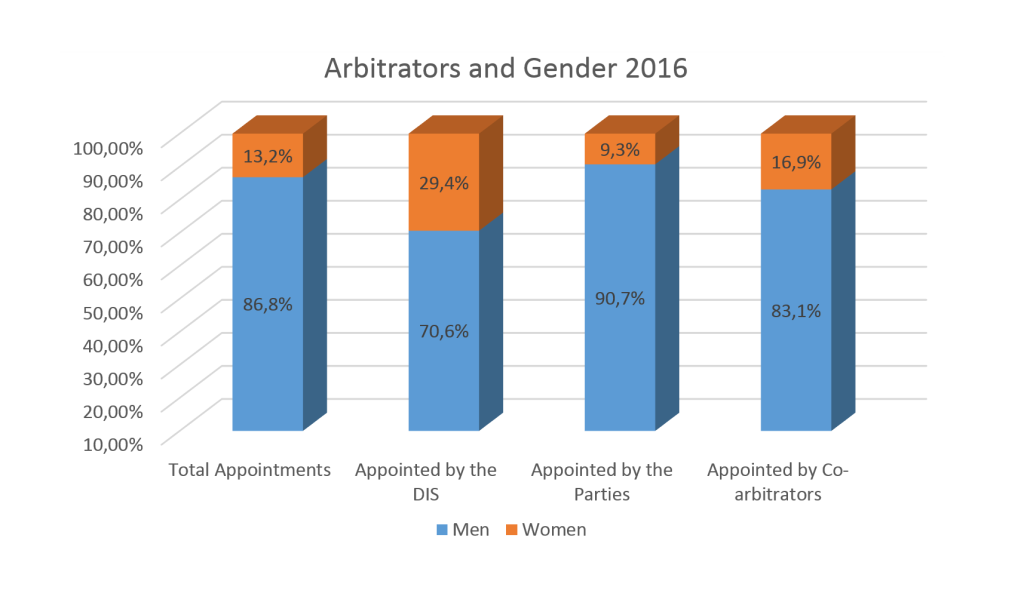 This is the first time that DIS has published this data, so no year-on-year comparisons are available. When I looked at the data, this got me thinking about my personal experience: All of the DIS tribunals on which I have served as an arbitrator to date had a female co-arbitrator or a chairwoman. None of the tribunals was all male, and neither had two women. I must admit, however, that the picture is different for the arbitral tribunals in cases where I appeared as counsel. The majority of them were all male.

Last year, when the ICC started to publish its arbitrator appointments, I had a first look at their data. My sample back then consisted of 54 arbitrators, of whom 11 were women (20%). These were the findings in a nutshell: All of the presidents appointed by the ICC court were men. The picture was markedly different for sole arbitrators. Six out of the 11 sole arbitrators (55%) appointed by the ICC Court were women. Of the 12 tribunals, eight were all male (67%). In the other four tribunals, the woman arbitrator served as co-arbitrator in three and as president, appointed by her male co-arbitrators, in one case. Looking at total appointments, the ICC Court went for women in 6 out of 14 cases, that is, in 43% of its appointments.

In summary, both the DIS Appointing Committee and the ICC Court promote the appointment of women as arbitrators: In the case of DIS, the institution appointed 29.4% female arbitrators, compared to a ratio of 11.5% for appointments by parties and co-arbitrators. For the ICC, its appointment ratio in my (small) sample of 43% compares to 12.5% in the case of appointments by parties and co-arbitrators. The Pledge for Equal Representation in Arbitration in earlier studies has been found to have the backing of the arbitral institutions, and I would submit that the DIS data confirms this.

Finally, how does one benchmark these numbers? Here is one thought: As per the most recent statistics of the German Federal Bar (Bundesrechtsanwaltskammer), 34% of lawyers admitted in Germany (Rechtsanwälte und Rechtsanwältinnen) were women. If one were to assume that the proportion of women in the pool of potential arbitrators is roughly similar, then the DIS Appointing Committee has done not too bad of a job.