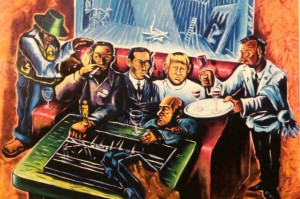 In October 2012, the Düsseldorf District Court (Landgericht) ordered the destruction of a fake painting by Jörg Immendorf. Its decision was based on a provision in the German Copyright Act (Urhebergesetz), pursuant to which forged works of art can be destroyed on the basis of a court order. This decision has now been set aside by the Court of Appeals (Oberlandesgericht) Düsseldorf.

Whether “Ready-Made de l´Histoire dans Café de Flore” (shown above) is an original painting by Immendorf, one of Germay’s best known contemporary German painters when he passed away in 2007, will perhaps never be established. The first instance court was convinced that it was a fake, and granted the application of the artist’s widow to have destroyed.

Upon appeal, the higher court looked at the rather dubious circumstances which the painting was sold: The defendant’s brother had  bought „Ready-Made de l’Histoire dans Café de Flore“ in 1999 for DM 30,000 straight out of Immendorf’s workshop, complete with a certificate of authenticity. After having heard witnesses and, in particular, an expert, the first instance court was convinced that the painting was an unauthorized copy of an earlier Immendorf painting, and most likely reproduced using a projection device.

The Court of Appeals, however, interpreted the evidence differently. Under the basis of witnesses that the court had heard, the court found that Immendorf had authorised direct sales of works produced in his workshop by his assistants. In the interpretation of the Court of Appeals, these circumstances amounted to a implicit authorisation of the artist. The Court of Appeals also had serious doubts as to the authenticity of the painting, but from it’s perspective, this question was not relevant: Even if the painting was not an original, Immendorf’s authorisation had to be construed as the authorisation of  an adaptation that was published with the artist’s consent within the meaning of Sec. 23 German Copyright Act (Urhebergesetz)..

Thus, the court saved the life of “Ready-Made de l´Histoire dans Café de Flore”, which had been living on death row ever since the October 2012 judgment. The Court of Appeals had not granted further leave of appeal to the Federal Supreme Court. It remains to be seen whether Immendorf’s widow will apply for leave of appeal, which will be granted only in narrow circumstances.

It is, however, worth noting that “Ready-Made de l´Histoire dans Café de Flore” appeared in an auction house in Düsseldorf, where it was discovered by the widow, relatively briefly after the artist’s death. The only witness who would have been able to speak on the authenticity of the painting with absolute authority at this point in time was not longer available.