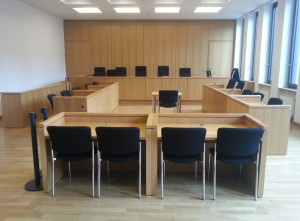 The situation with respect to remote courts in Germany is ambivalent. On the one hand, the law is advanced, on the other hand, both IT infrastructure and the attitute of judges and lawyers have only now started to catch up.

Law in the Books

The Code of Civil Procedure (Zivilprozessordnung, ZPO) is fairly modern and forward-looking, and has been so surprisingly early. As far back as 2002, legislation was introduced to allow the conduct of court hearings using videoconferencing technology. Originally, the provision required that both parties consent to the use of videoconferencing. Since 2013, the court can make an order pursuant to Section 128a ZPO allowing the use of videoconferencing technology without the parties’ consent. There are, however, three caveats:

First, the provision requires the judge or judges to sit in a courtroom that is accessible to the public. As a matter of principle, all court hearings in civil and commercial matters are open to the public. The failure to ensure public access is an absolute ground for the judgment to be set aside (absoluter Revisionsgrund; Section 547 no. 5 ZPO). The principle of public access to court hearings is of such a fundamental nature that courts can exclude the public only in very narrow and specific circumstances. The Covid-19 crisis has triggered a discussion whether it would be permissible to exclude the public based on a public health exception. It appears that the majority of commentators believe that Covid-19 is not sufficient to justify the exclusion on that basis (see here for a more detailed discussion). Courts in practice, therefore, must make sure that the courtrooms remain accessible to the public even if the hearings are held via remote access for counsel and parties.

Secondly, until the Covid-19 crisis, the provision allowing videoconferencing has been largely neglected and led the life of a sleeping beauty, waiting for a prince to wake it up. In the past, if counsel suggested to use the provision and allow a party to participate remotely or to hear a witness or expert via video link, these suggestions were often not taken up by the judges.

The third caveat concerns the availability of videoconferencing technology. Because the principle of public access must be observed, it does not suffice for the judge to sit in her office in front of her laptop linked to counsel and for the parties to sit in their respective offices. There must be IT equipment in place to broadcast the hearing into a courtroom, and hence, a computer screen and speakers would be required. The level to which individual courts are equipped to handle video conferences on a large scale varies widely, mostly along the lines of the various federal states, in part because of different levels of funding. What also varies from federal state to federal state is the legal assessment of the various providers of videoconferencing services such as Zoom, Skype for Business and WebEx: some federal states have equipped all judges with Skype for Business on their notebooks, others deem the same service to be unacceptable from a data protection viewpoint (see here for an overview of the systems used in the individual states).

Summing up, it turns out that it is not a prince bringing Section 128a ZPO to life, but a beast: Covid-19 has brought the provision to the attention of both the legal community and the general public and has created huge momentum towards the use of video technology, including investment in hardware and software.

Section 128a ZPO requires that sound and image be broadcast into the court room, hence it is not an option to handle hearings by way of telephone conference only. A judge could, however, convene a telephone conference with counsel to discuss the status of the matter. It is acceptable from a legal point and also common practice for the judge to use such a conference call to provide her initial assessment of the case and initiate settlement discussions between the parties.

In 2018, Germany introduced a secure system of e-communication between lawyers and courts (besonderes elektronisches Anwaltspostfach, or beA for short) that allows for e-filing of virtually all documents in civil and commercial matters.

So far, no new legislation has been implemented that would address the Covid-19 crisis and civil procedure (see Benedikt Windau’s guest post for details).

Recently, draft legislation for the labour courts and the social security courts was initiated by the president of the Federal Labour Court (Bundesarbeitsgericht) that pushed for a fairly far-reaching reform, allowing the judges to exclude the public for as long as the Covid-19 crisis persists and to make videoconferences mandatory. It would have allowed judges to also join the hearing remotely. This was of particular importance since the labour courts, unlike the civil courts, sit with professional and lay judges. At the level of the Federal Labour Court and the labour appeal courts, lay judges will typically have to travel, and sometimes quite a distance, to attend the hearings.

However, the proposal likely will be implemented in a watered-down version only that neither allows the public to be excluded nor gives the judges the power to make videoconferences compulsory. The labour courts are, at least for now, not turned into a laboratory for procedural innovation.

Further reading: Benedikt Windau’s zpoblog does a great job of covering the developments in Germany, and Richard Susskind’s  Remote Courts Worldwide showcases the developments on an international scale.