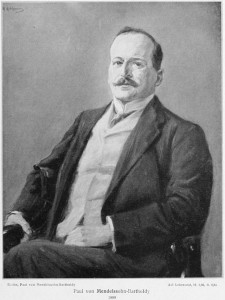 Last week, I had briefly posted that Judge Rakoff had ruled against the heirs of Paul von Mendelssohn-Bartholdy (left) in their suit seeking the restitution of Picasso’s Madame Soler. Today, we have a guest post by Michael Schulz of Frankfurt’s Goethe University who looks at the case in some more detail. END_OF_DOCUMENT_TOKEN_TO_BE_REPLACED

In an earlier post, I had reported about the restitution claim brought against Bavaria in New York in 2013. The heirs of Paul von Mendelssohn-Bartholdy were seeking the restitution of Picasso’s “Madame Soler” from the Bavarian State Painting Collection (Bayerische Staatsgemäldesammlungen). In a decision on June 27, 2014, Judge Rakoff dismissed the action, on the basis that  Bavaria was entitled to sovereign immunity. END_OF_DOCUMENT_TOKEN_TO_BE_REPLACED