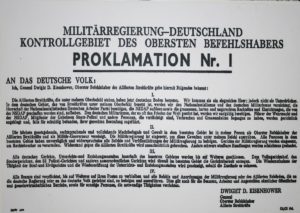 2020 does not only mark 75th anniversary of the end of the Second World War, but also the beginning of the efforts to rebuild Germany’s institutions. Today is the 75th anniversary of the reopening of the District Court (Landgericht) Frankfurt. General Eisenhower’s Proclamation No. 1 of 19 March 1945 had closed down all German courts until further notcie. The order of the US Military Government to re-open the Frankfurt district court came on 24 and August 1945. END_OF_DOCUMENT_TOKEN_TO_BE_REPLACED