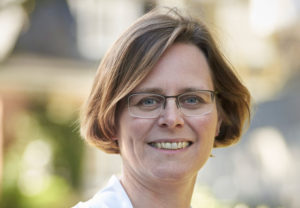 Astrid Wallrabenstein is a Professor of Public Law with a focus on Social Law at Frankfurt’s Johann Wolfgang Goethe University and a Director of the Institute for European Health Policy and Social Law.

Each of the Court’s two senates consists of eight justices. Professor Wallrabenstein joined the bench alongside Monika Hermanns, Sibylle Kessal-Wulf, Doris König and Christine Langenfeld, making her the fifth female justice in that senate – for the first time in the court’s history, one of its two senates has a majority of female justices. The First Senate currently has three female justices, resulting in a gender equilibrium amongst the 16 judges. To put this into perspective: Since the Court was established in 1951, 19 female justices were appointed in total, eight of whom are currently in office.

In case you wonder how an even-numbered bench of judges decides: In case of a tie, the application to annul a law or to find that the constitution has been violated that is before the court is rejected: “In the event of a tied vote, the Court cannot declare that the Basic Law or other federal law has been violated.” Thus a successful applicant must always convince five judges to find in her favour.

Half of the justices are elected by the German parliament, Bundestag, and the other half – as in the case of Professor Wallrabenstein, by the Bundesrat. The election of a justice requires a two-third majority. The selection of the President and Vice President, respectively, chairing their respective senate, alternates between Bundestag and Bundesrat and also requires a two-thirds vote. In practice, the parliamentary parties have devised a system allocating the right to nominate justices amongst them in accordance with their relative strength. Professor Wallrabenstein, for example, was nominated by the Green Party. The fact that nominees need a two-third majority forces the nominating party to propose candidates who are acceptable accross party lines and whose credentials are impeccable.

The justices are elected for a 12-year term, but must retire upon reaching the age of 68; they can serve only one term. Three out of eight members of each senate must have served as a judge on one of the federal courts, that is, on one the highest courts or the five branches of the German judiciary (Bundesgerichtshof for civil and criminal matters, Bundesverwaltungsgericht for administrative matters, Bundesarbeitsgericht  the hightest labour court, Bundessozialgericht for social security matters and Bundesfinanzhof, the tax court). In practice, these justices are career judges. The other members are predominantly drawn from academia, with the remaining justices having held political office or – very rarely – been in private practice.

On of these rare appointees from the ranks of practicing lawyers is the Court’s new President, Stephan Harbarth, who was also elected on 15 May 2020. Harbarth, however, ticks two boxes: He was not only a partner in one of Germany’s better-known business law firms and a prominent corporate lawyer, but also a fairly high-ranking member of parliament (Bundestag) for Angela Merkel’s Christian Democrats.

P.S.: Professor Wallrabenstein was an occasional contributor on Verfassungsblog. Here’s a link to her posts, and here’s Max Steinbeis’ editorial commenting upon, inter alia, her election.