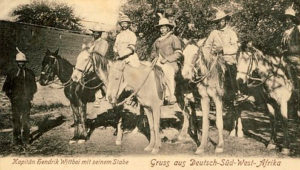 The Constitutional Court (Verfassungsgerichtshof) of the Federal State of Baden-Württemberg had to deal with an application of the Nama Traditional Leaders Association regarding the return of historic items that once belonged to Hendrik Wittboi. Witbooi (c. 1830 – 1905) was a chief of the Nama or ǀKhowesin people in present-day Namibia – German South West Africa (Deutsch Südwestafrika) at the time. He is regarded as one of the national heroes of Namibia, having lead the 1904 fight against German colonial rule.

After the battle of Hornkranz in 1893, Wittbooi’s kraal was looted by the German colonial forces. The looted property is believed to have includes the family bible, with the captain’s handwritten notes,  and his whip. Both objects were donated to the Linden-Museum in Stuttgart in 1902. They were part of the collection of the museum, which today is the State Museum of Ethnology, until the restitution in February 2019.

When the Nama leaders filed their application, Baden-Württemberg had already agreed to return these items to the Republic of Namibia. The restitution was , but the Nama Traditional Leaders Association applied for an injunction to stop the return to Namibia, and instead requested that the items, a bible and a whip, be returned to them. The Constitutional Court in Stuttgart was thus faced with an internal Namibian dispute as to who the rightful and proper recipient of these items should be.

The court dismissed the application on procedural grounds. Under the applicable rules of Baden-Württemberg’s state laws, an application to the Constitutional Court requires that main proceedings are already pending, which was not the case. The application was dismissed as inadmissable (unzulässig). The court further held:

“It has neither been shown nor is it evident which of the applicant’s rights arising under the state constitution would be violated by the imminent return of the property in question to the Government of Namibia. It does not even follow from the applicant’s submission what legal position under civil law is being asserted with regard to the objects.

In any event, there is a lot to be said for the fact that the legal dispute concerns a dispute that has no connection with this state’s constitutional law, but that should be clarified internally in Namibia.”

The Republic of Namibia had reached out to Baden-Württemberg already back in 2013 and asked for the return of the bible and the whip. This is one of the rather few cultural assets looted during Germany’s colonial reign to have been restituted. In 1996, the City of Bremen handed over a letter book of Hendrik Witboois directly to the Namibian president.  In the summer of 2018, the German federal government also returned bodily remains of members of various indigenous communities to the Namibian government