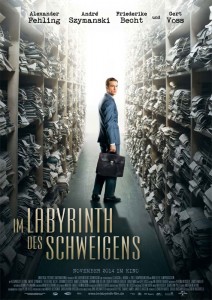 Today is the 70th anniversary of the liberation of Auschwitz. It may seem odd to recommend a movie on this occasion, but if you are interested in post-war (legal) history, this “smart and well-acted take on a historically significant if little-known story” is a must-see. Labyrinth of Lies (Labyrinth des Schweigens) is a compelling movie about the Frankfurt public prosecutors, led by Fritz Bauer, who brought the atrocities in Auschwitz to trial.

Giulio Ricciarelli, the director, found some powerful and emotional pictures that help him tell a highly complex story. The main protagonist is young Johann Radmann, a fictitious public prosecutor – in real life, Joachim Kügler (1926-2012) and Georg Friedrich Vogel (1926-2007) were the prosecutors driving the investigations. The story is told from his perspective, and explores the resistance within the organization as well as in society at large that he faced. Fritz Bauer is a historic character. played by the great Gert Voss in his last movie; he passed away before the movie opened at the end of last year. As fas as I know, the film is historically (and legally) accurate, including the fact that Fritz Bauer informed Mossad, the Israeli secret service, that Adolf Eichmann could be found in Argentina. This of course led to the first Auschwitz trial in Jerusalem.

The film was shown at the Toronto film festival; there is a version with English sub-titles. The German title translates as “In the Labyrinth of Silence”, which I believe more adequately summarizes the German attitude to Auschwitz the Adenauer area.

One thought on “Labyrinth of Lies: Fritz Bauer and the Auschwitz trials”