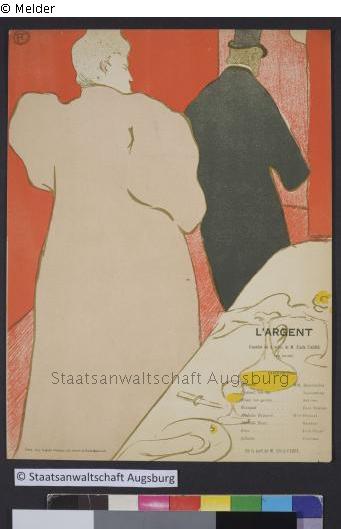 We have covered the spectacular Gurlitt case here before. The treasure trove of looted art seized by the Bavarian public prosecutor’s office in a Schwabing apartment raises complex legal issues at the cross-road of the law of seizure and the law of movable property – these were discussed at the VII. Heidelberg Art Law Conference last week. The panel discussion was jointly organized by the German Institute of Art and Law and the Research Center for Transnational Commercial Dispute Resolution at EBS University of Economics and Law, Wiesbaden.  I am glad that one of the panellists, Professor Matthias Weller, co-director of IFKUR and director of the EBS Dispute Resolution Center, has agreed to share his views in a guest post. He argues that the seizure of the works of art by the Augsburg public prosecution opens the doors for civil law claims.

The Von-der-Heydt Museum in Wuppertal approached the public prosecutors in Augsburg this week and raised claims against the public prosecution as the current possessor for recovery of items of “degenerated art“ (entartete Kunst) taken from its collection by the German Reich under Nazi government.

In my view, the public prosecution lawfully seized the paintings in the course of its criminal investigations. According to what is known to the public, the public prosecution searched Gurlitt’s house in connection with a suspicion for tax evasion after arresting Gurlitt near the Swiss border having EUR 9,000 cash with him. In that case, the paintings were found by chance (Zufallsfund). Then the prosecutors must seize such items according to Sec. 108 German Code of Criminal Procedure (Strafprozessordnung; StPO) if there is the possibility that the items result from a crime. If a prosecutor finds stored 1,200 paintings in a small flat, partly packed together, it appears plausible that there are doubts as to whether these paintings may stem from a theft. Alternatively, the public prosecution may have investigated directly under a suspicion against Gurlitt of crimes in connection with the paintings. In that case the seizure would have been justified by Sec. 94 German Code of Criminal Procedure. Either way, the seizure seems to have been lawful.*

Having seized the paintings, the question arises, to whom these paintings should be returned. In principle, items seized from a person are to be returned to that person once there is no need for these items anymore for the criminal investigation. Some exceptions of this principle exist in the case that it is evident to the public prosecution that the seized items belong to another person. The public prosecution is entitled to investigate the identity of such persons, i.e. by presenting the paintings on a suitable website such as lostart.de.

Should the public prosecution be in error on this point, then the interesting question arises whether the prescription period of the claim for return of property to the owner has elapsed. Under German law, the claim of the owner against the unlawful possessor is time barred after 30 years of possession (Sec. 197 German Civil Code; Bürgerliches Gesetzbuch) even if the possessor had possession in bad faith. Therefore, no-one was able to enforce claims against Cornelius Gurlitt as long as he had kept possession for longer than 30 years, even if any claimant had known about the whereabouts of these paintings.

However, this is at least my theory on German property law, due to the seizure by the public prosecution, Cornelius Gurlitt now lost possession, and the prescription of the old claim against Cornelius Gurlitt does not affect the new claim of the owners against the public prosecution in their capacity as new possessors. Sec.198 German Civil Code only allows attribution of prescription times to the benefit of the new possessor, if the successor in possession gained possession by a willful act of the former possessor, and Gurlitt did not wilfully transfer possession to the public prosecution – quite to the contrary. This means that the seizure under criminal procedural law changed the entire picture and provides for new civil law remedies of the owners.

Speaking of the owners, the question arises who could still be owners. This is a difficult question. In relation to Nazi-looted art, my position is that the time limits of the old post-war restitution legislation do not affect any claims of victims and their heirs under general civil law. This has been accepted by the German Federal Court of Justice in the case of the poster collection of Hans Sachs in 2012, at least for the set of facts of that case.

Consequently, if a claimant is able to show today that he or she is still owner of a painting in the possession of the public prosecution and/or soon again in the possession of Cornelius Gurlitt, this claim is neither time barred nor pre-empted by Military Law No. 59 and parallel post-war restitution legislation. When it comes to „degenerate art“, some commentators believe that the seizure of such pictures by the Nazi Regime and the follow-up legislation of May 31, 1938 would not be considered valid today, others hold to the contrary.

As far as seizures of „degenerate art“ took place against German state museums, it was „merely“ the state, i.e. the German Reich, that removed paintings from its own museums, and in this case, there is of course no claim today. A municipal museum like the one in Wuppertal, on the other hand, would presumably count as a legal person independent of the German Reich and thus may have a case…

* Editor’s comment: For a contrarian view of the legality of the seizure by the Augsburg public prosecution see Volker Rieble’s article in Frankfurter Allgemeine Zeitung on November 25, 2013 (“Politische Strafjustiz”). Rieble heavily criticises the seizure of Gurlitt’s collection as being politically motivated and devoid of any legal basis. Personally, I certainly feel uneasy about the way the public prosecution has handled the matter. Not only its lack of communication in this matter raises questions. On what basis, for example, have they kept possession for almost two years of paintings that clearly were legally owned by the Gurlitt family. There are, for example, paintings by Gurlitt’s family members, or works of art created after 1945. Still, on the basis of the limited information available about the seizure, I would agree with Matthias Weller’s arguments set out above. Peter Bert

One thought on “Art Law: Litigation is Coming Closer in Gurlitt Case”