Update: As previously reported,  the Hague Conference on Private International Law is holding a Special Commission meeting on the Service, Evidence and Access to Justice Conventions. At Letters Blogatory, Ted Folkman has now posted his comments of days three and four of the proceedings in The Hague. 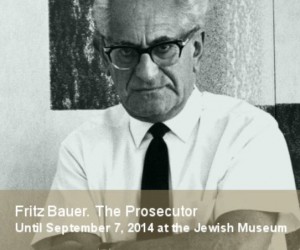 Fritz Bauer. The Prosecutor (Fritz Bauer. Staatsanwalt). The new exhibition at Frankfurt’s Jewish Museum opened on April 10, 2014. It is devoted to Fritz Bauer, the State Attorney General (Generalstaatsanwalt) for the state of Hesse and the driving force behind the Frankfurt Auschwitz trials that ran from December 20, 1963 to August 19, 1965. If you are in town between now and early September, go and see it.

On May 23, 1949, the German Basic Law (Grundgesetz), the post-war constitution of the Federal Republic, came into force. Had the law not been changed recently as part of the pensions reforms, the constitution would have reached the general retirement age today. Its first sentence reads: “Human dignity shall be inviolable.” The photo shows Article 1 outside the Frankfurt District Court (Landgericht).

This week, the Hague Conference on Private International Law is holding a meeting of the Special Commission on the Practical Operation of the Service, Evidence and Access to Justice Conventions. At Letters Blogatory, Ted Folkman is reporting live as events unfold. The Hague Conventions of course are central to many elements of cross-border litigation, and Ted covers what changes are being discussed.