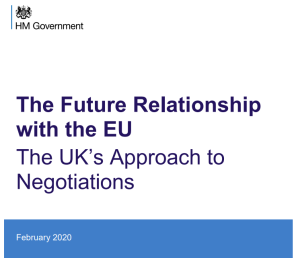 Earlier this month, when the European Commission published its draft mandate for the Brexit negotiations with the United Kingdom, I looked at what was in there regarding matters relevant to this blog, in particular at judicial cooperation in civil and commercial matters. The European Commission’s paper was silent on these topics. Today, the U.K.’s equivalent has been published, and it contains a short paragraph on the topic: END_OF_DOCUMENT_TOKEN_TO_BE_REPLACED

The United Kingdom‘s plan to accede to the 2007 Lugano Convention post-Brexit appears to be on track. The UK Government announced that its intention to accede on 28 January 2020 (see here). The 2007 Lugano Convention is open to non-EU member states if all existing parties agree. The UK Government’s press release records that the UK has secured statements in support of it joining the 2007 Convention from Switzerland, Norway and Iceland. So now all that is required is to secure the consent of the EU to this course of action. Assuming that such consent can be secured, it is the intention of the UK Government to accede to the 2007 Convention at the end of the transition period (currently scheduled  for 23.00 GMT on 31 December 2020).