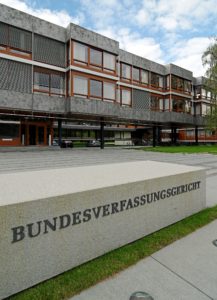 Almost to the day five years after the Act on the Protection of Cultural Property (Kulturschutzgesetz; KGSG) entered into force, the Federal Constitutional Court (Bundesverfassungsgericht) published a decision which dismissed several constitutional complaints (Verfassungsbeschwerden) challenging various previsions of the Cultural Property Protection Act. The constitutional complaints were brought by art and antiquity dealers and auction houses. They alleged that certain provisions of the Cultural Property Protection Act violated their basic rights (Grundrechte) based on Article 12, which protects the freedom to choose and exercise one’s profession and occupation and on Article 14 Basic Law (Grundgesetz),which guarantees and protects the right to private property.

The Cultural Property Protection Act entered into force on 6 August 2016. Replacting an 1955 predecessor, it provided for a far-reaching revision of the German legal regime governing the protection of cultural property. In particular, it contains provisions on the import and export of cultural property and, on the restitution of illegally removed cultural property. The Act also contains rules that govern the marketing of cultural objects and the due diligence standards to be observed by market participants.

The Federal Minister of State for Culture and the Media maintains a website that provides an English-language guide to the rules and regulations.

At the time, the new Act was heavily critized by art market participants and legal commentators – Hans-Jürgen Hellwig for example, a prominent lawyer who inter alia served as Vice President of the Council of Bars and Law Societies of Europe (CCBE), called the Act “disproportionate and unreasonable” (unverhältnismäßig und unangemessen) and questioned its legality.

The specific provisions that were challenged were Section 21 para. 2 and Section 24 para. 1 KGSG, which prohibit the export of cultural objects that exceed the value and age limits specified by the Act, unless an authorization is obtained.

Furthermore, Section 28 KGSG was challenged, which governs the import of cultural objects that are illegally exported from the country of origin. In a corresponding provision, Section 21 no. 3 KGSG provides for an export prohibition following an unlawful import. Section 40 KGSG prohibits the marketing of cultural property that was lost, unlawfully exported or unlawfully imported. Violations of these prohibitions are not only penalized by criminal sanctions (Sections 83 et seq.), they may also have civil law consequences that include the invalidity of the contract relating to such cultural property. Section 42 para.1 KGSG provides for specific duties of care for the marketing of cultural objects.

Decision of the Federal Constitutional Court

The Court found that some of the complainants lack standing (eigene Betroffenheit). The main argument, however, for the dismissal of the constitutional complaints is that the complainants have not exhausted the legal remedies available to them in the ordinary courts. The Federal Constitutional Court said that the provisions that were challenged by the complainants contained legal concept that must be interpreted by the courts. It is first and foremost for the ordinary courts (Fachgerichte) to interpret and apply the law. Only once the ordinary courts have rendered decisions in specific cases and interpreted and applied the law to the facts and circumstances in these cases, the Federal Constitutional Court could step in and review these court decisions.

So far, only two such decisions by the lower courts have become known, one by the Karlsruhe Administrative Court (Verwaltungsgericht) in 2020 and the other one by the Munich Administrative Court just now (we will cover it in a separate post shortly). Based on the rather heavy critizism the Act had initially faced, one would have expected way more litigation to be triggered by it. So perhaps, the Act as applied in practice turned out not to be so bad after all.