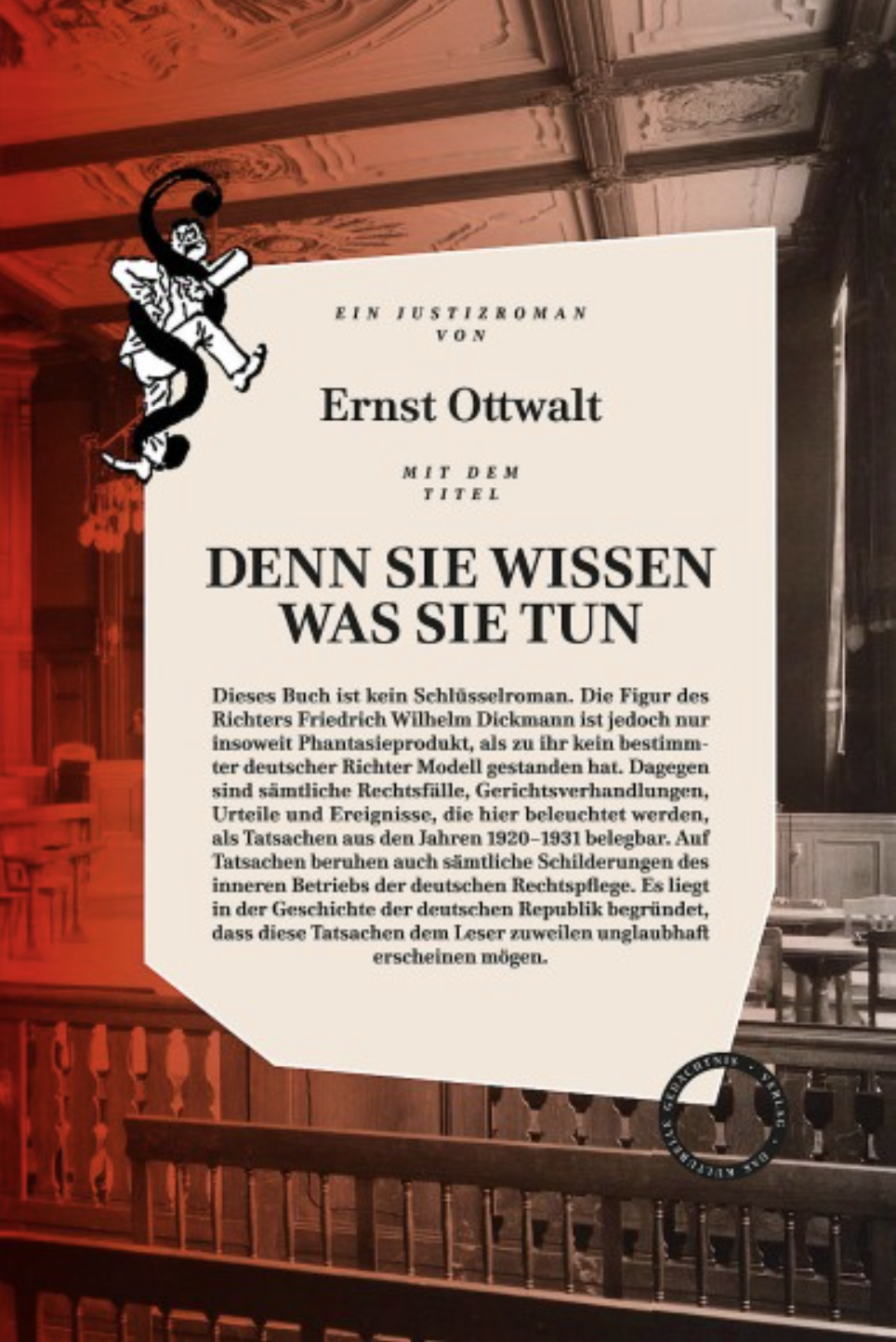 Recently, I read two biographies of German lawyers in the early 20th century – a real and a fictitious one.  In last week end’s post, I wrote about the historic one, Ronen Steinke’s biography of Fritz Bauer, the prosecutor who brought Auschwitz and – indirectly – Adolf Eichmann to trial, which has recently come out in an English translation. I re-read the Fritz Bauer biography alongside Ottwald’s “Because They Know What They Are Doing. A German justice novel” (Denn sie wissen, was sie tun. Ein deutscher Justizroman), first published in 1931 and newly edited in 2018.

Ernst Ottwald was a communist German writer and playwright, probably best known for his cooperation with Bert Brecht on the movie script Kuhle Wampe. His books were amongst those burnt in May 1933. Born in 1901, Ernst Ottwald was a contemporary of Fritz Bauer (1903- 1968). Like Bauer, Ottwald emigrated in 1934 – to Moscow via Denmark and Czechoslovakia. In 1936, he became a victim of the Stalinist purges and was deported to Siberia, where he died in a camp near Arkhangelsk in 1943.

“Denn sie wissen was sie tune” is the fictitious biography of Friedrich Wilhelm Dickmann, a Berlin judge in the 1920s. By means of a naturalistic novel, Ottwald presents the career of an average conservative, anti-democratic German judge of his time. Tthe son of a judge who has started his career in Imperial Germany, Friedrich Wilhelm served in the Frist World War, and most likely would have pursued a military carreer had Germany won the war. He follows the family tradition and reads law in Jena and Berlin, a member of a fencing student fraternity, wearing the scar resulting from a hit as a badge of honour. We see Dickmann progress from law student to Referendar, from Assessor to judge. He is appointed to a position in a small provincial town and later returns to serve in the Berlin criminal courts. (And we see that the overall design of legal education and judicial careers has not changed much since the days of Friedrich Wilhelm Dickman and, indeed, of generations before him.)

Kurt Tucholsky, who obtained a doctorate in law, even though he never practised as a lawyer, favourably reviewed Gottwald’s novel; his 1932 review is reprinted in the new edition. I am not trying to do better,than Tucholsky but rather quote him:

“What I like is: this lawyer is not a black swine, not a wild berserker, not a particularly vicious person – he is the product of education, caste and system. It is well seen how the wheels of the great injustice drive lock into each other, file by file, paragraph by paragraph, with responsibility being divided into infinitely small pieces, and in the end, no one did it.”

As other reviewers have pointed out, Friedrich Wilhelm Dickmann is not unlike Diederich Heßling in Heinrich Mann’s 1918 novel Der Untertan. But Ottwald does not denounce his character. Throughout the novel, I felt  a sense on inevitability about Friedrich Wilhelm’s Dickmann’s personal life and his career. Things were done, or not done, because that’s the way one did or did not do things.

I mentioned that I re-read the Fritz Bauer biography alongside Ottwald’s novel: What I found striking were the common themes in both the fictitious biography of Friedrich Wilhelm Dickmann and the real one of Fritz Bauer’s early years – antisemitism, for example, amongst law students, seen from Dickmann’s nationalistic perspective, and from that of Fritz Bauer, the Jewish law student and young judge.

Ottwald’s novel has been reviewed by Simon Strauß in Frankfurter Allgemeine Zeitung and by Norman Weiß on his blog Notizhefte.