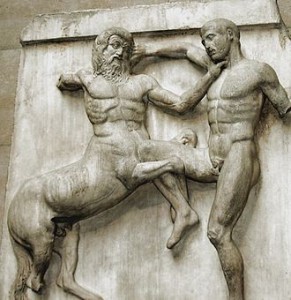 Earlier this month, we reviewed the draft directive for the EU Commission’s Brexit negotiations with the United Kingdom for matters relevant to this blog. Today, the European Commission’s negotiation mandate was confirmed. Comparing the draft version with the final mandate approved by the 27 EU member states today, there is one noticeable change.

Following an initiative of Greece, supported by Italy and Cyprus,  a new section 33 has been inserted into the final mandate, which reads as follows:

“The Parties should, consistently with Union rules, address issues relating to the return or restitution of unlawfully removed cultural objects to their countries of origin.”

The Elgin marbles are of course the most obvious and highly symbolic item that comes to mind if one thinks about repatriating cultural objects from the United Kingdom to Greece: Between 1801 and 1812, the Earl of Elgin had about half of the surviving sculptures of the Parthenon in Athens removed and shipped to London, where he sold them to the British government. They are on display in the British Museum.

In the English press, this development has been reported upon fairly widely and framed as “Will Britain lose the Elgin marbles?”  Here’s further from The Economist:

“The Greeks insist piously that this refers solely to the fight against trade in stolen artefacts, since London is a centre for antique dealing. But Eu diplomats note that the Greek government thinks that the Parthenon marbles in the British Museum were stolen by Lord Elgin in the early 1800s. And Greece’s culture minister has said that Brexit increases European support for their return.

The British Museum strongly supports the fight against trade in illicit antiquities. But it also insists the sculptures were acquired legally. The government says it will not even discuss their return, which would require a special act of Parliament. What this spat really shows is the use of Brexit talks to pursue other grievances. Spain is going after Gibraltar. Several countries want to keep on catching British fish. France talks of getting rid of British passport controls at Calais. Since any trade deal needs unanimous approval, why not pile on other conditions? At least it creates bargaining weapons to use in an eventual showdown in what look like being rancorous negotiations running up to the deadline at the end of the year.”
As important as the issues of cultural heritage and restitution are, I am not sure whether it is helpful to reduce them to bargaining chips in the Brexit game. In a best-case scenario, the new element of the European Commission’s mandate would trigger a meaningful debate about the principles that should govern the return or restitution of unlawfully removed cultural objects to their countries of origin. In a worst-case scenario, the issue would be reduced to populist coverage of symbolic items; it would be blown out of proportion to its relevance to the overall goal of the Brexit negotiations and deviate scarce resources and political good-will from the myriad of other matters than need to be resolved. These matters are time-critical, given the deadline in the Withdrawal Agreement. The Elgin marbles, on the other hand, have been in London for more than 200 years.

The photo shows a metope from the Elgin marbles depicting a Centaur and a Lapith fighting.